Next to sharing tips on how to book a trip I thought it would be nice to share perhaps some of my experiences with a destination I have been too. In summer 2012 I had the opportunity to make a 10 week long trip through South East Asia and visit several breath-taking places. One of the places I remember most is Sumatra Indonesia, where I cam face to face with wild and semi-wild orangutans.

In 2010 I made my first trip to Asia and I went to Borneo where I made my first attempt to visit orangutans in the wild. Unfortunately these creatures are extremely endangered so I was unable to see them in their natural habitat, but there was a rehabilitation center for young ones, so I managed to see them after all. Having that in mind I decided this time I want to see the real deal, so as part of my plan I decided to try my luck this time in Sumatra.

I booked my flight from Bangkok to Medan with Air Asia, the easiest way to fly in. Sumatra is not extremely developed, so you have to rely on taxis to get around, as driving yourself is simply not an option! Medan itself is a congested city, so it is best to go straight from the airport to the village of Bukit Lawang, on the border of the rain forrest. This village is the gate to the rain forrest and the entire village is geared for this purpose. I had booked a guide for my two day trek before. But once I arrived in the village I realized that it is much cheaper to book it on the spot. A two day hike with a guide, very VERY basic camping overnight and all found is around 60 euros a person. Accommodation in the village is around 10 euros pp per day. The village of Bukit Lawang was destroyed by a flood in 2003, wiping out the entire village and killing many people in the process. The village has been rebuild since, but items such as internet and an ATM are still not present. So take enough cash with you from the airport! The accommodation is basic in the village, but falling asleep with the sounds of monkeys is magical!

The trek itself starts early in the morning with a visit to the feeding of the orangutans. On the edge of the park there is a sanctuary where (semi) wild orangutans can come to receive food if they want to. I was lucky enough to see a mother and her baby leisurely eating bananas. After this feeding the true hike began.

Two weeks previous to this one I had done a hike in Laos(story will follow later) where I realized I was not made to be one with nature, but the thought of seeing orangutans (and some firm group pressure) made me go. The forrest is filled with a variety of creatures, both adorably and slightly less so, and we were extremely lucky to see several orangutans up close. This was for me honestly one of the most magical moments; seeing a female orangutan with a baby in their own element completely at ease. The hike itself took us about 9 hours of walking, including some breaks, before we ended up at our camp site for the night. The campsite consisted of a few little tents made of plastic over poles next to the river. We had our own cook that prepared an amazing meal as we watched the sun set in the middle of the rain forrest. 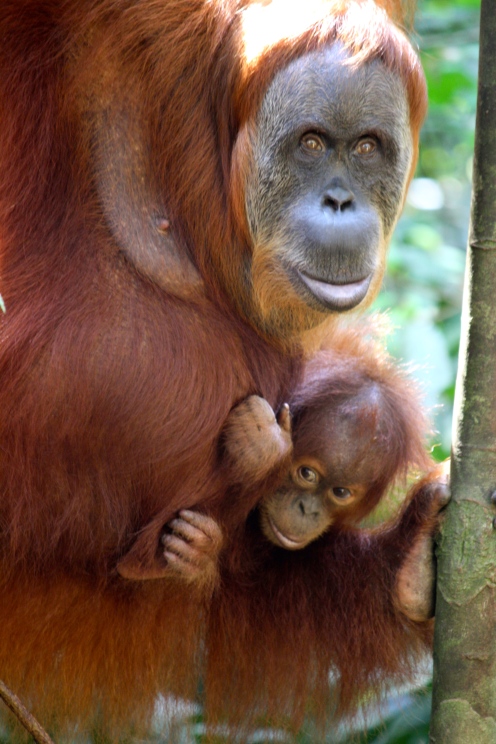 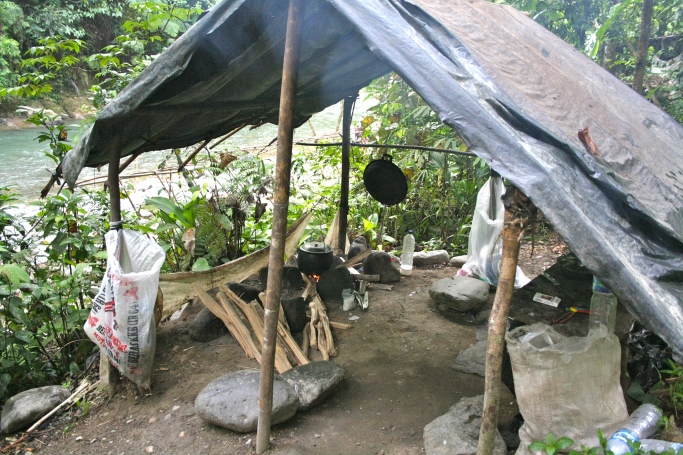 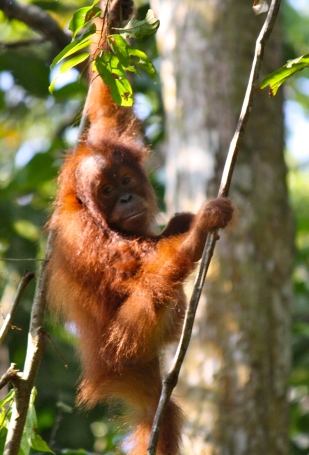 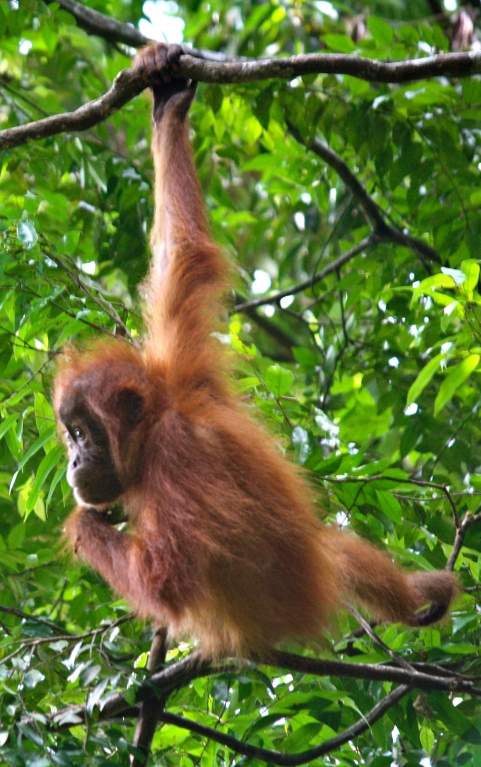 The next day we explored the surroundings slightly before packing our stuff to go back to the village. Luckily this didn’t involve a 9 hour hike back. They invented a creative system with big tubes tied together so we could float back (this included also our cook and all the cooking and sleeping materials, as monkeys were known to steal this otherwise). The ride back took about 1.5 hours and gave the opportunity to take in the spectacular landscapes.

Once back from the hike we stayed another day in the village whereby I want to visit the local orphanage set-up by a Dutch lady and her Indonesian husband after the floods of 2003 (kindertehuis Bukit Lawang). All in all was Sumatra an amazing place to visit, the hike is though, but the reward to see orangutans, a highly endangered species in the wild makes it worth it.